Why would you ride such a weird bike instead of a normal one?

And what would you need to know before buying a touring recumbent for your next trip? If you’ve already had the chance of talking to a recumbent rider, you may have noticed that most of them say that they love their recumbent and wouldn’t ride anything else.

So, what is it about recumbents that make people so passionate about them?

We have been riding “normal” bikes for a very long time, as every day commuters in the city, as well as cycle tourers (although only for shorter tours, the maximum was three weeks).

On our last cycle tour through Switzerland (in the autumn of 2014), we realized that something had to change if we wanted to realise our dream of a long-term cycle tour. A stiff neck and pain in the wrists were the main issues that wouldn’t go away even with a change of position or other small tweaks on the bikes. The same year, we had tried recumbent bicycles for the first time – Eva’s parents’ long-wheel-base recumbents: 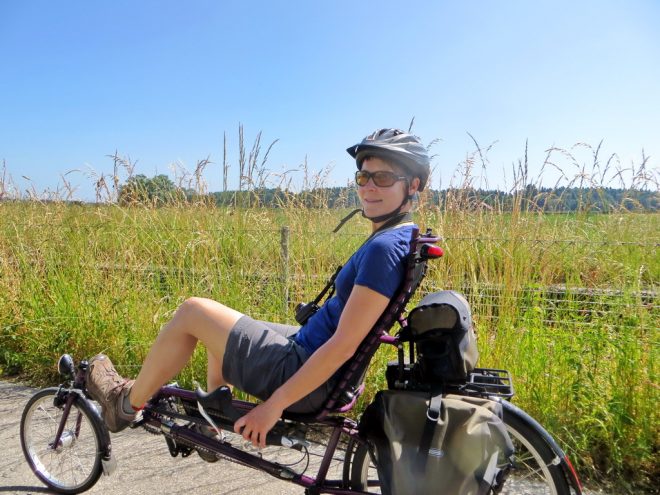 We were a bit wobbly especially when starting, but the downhills were so great that we wanted to investigate more into recumbents. We spent the following months on the web getting acquainted with recumbent language: long-wheel-base, short-wheel-base, under-seat-steering, above-seat-steering. We discovered different brands and different designs. We spent time travelling to specialized shops to try different models, before we finally decided to buy touring recumbents in the first half of 2015.

Two years later, we have pedalled over 13’000 kilometres on our recumbents, and are now part of this group of people who are convinced that they are great touring bicycles.

So, if you’re trying to decide whether you should buy a recumbent for your next tour, or if you’re just curious about the topic, here’s what we can tell you about touring on a recumbent:

No sore bum, because the weight is distributed all over your back and bum. No painful wrists, because they don’t have to bear any weight. No stiff neck, because it’s in a more natural position.

Actually, when I say “no pain”, it’s not entirely true. At the beginning, many people experience stiffness in the shoulder muscles because they’re tense while riding – this goes away with time and when you learn to ride in a more relaxed way.

Some people (including me, Eva) also experience what is known as “recumbent butt” (or “recumbutt”) – a certain type of pain in the gluteus maximus muscles when too much weight is pressing down on your bum, especially on long rides. Reclining the seat a bit more, changing the position slightly, and taking regular breaks can all help allieviate the ache.

Although not exactly a “pain”, some people also experience sleepy feet, especially on short-wheel-base recumbents with higher brackets. Wiggling your toes, unclipping the shoes, and taking mini-breaks to walk a few steps all immediately help.

Compared to a normal bike, our breathing accelerates much less when pedalling uphill. Thus, the only factor limitating effort are your muscles.

We met many people who thought that it was slower going uphill on a recumbent. Most of these people have probably never ridden one.

True, riding a recumbent uses different muscle groups, which need to be trained before being fully efficient.

True, you can’t stand up on a recumbent and use your weight to push down.

BUT, you can push with your back against the seat and thus use your whole body to push the pedals. We dare say that this is even more efficient than standing up on a normal bike. Especially if you use clip-in pedals (without them, you’ll lose some energy to keep the feet on the pedals).

So, carrying equal weight in luggage and with comparable physical training, we reckon that we are about the same speed going uphill on recumbents than tourers on normal bikes. Some people overtook us, and we overtook some. We’re somewhere in the middle.

You’re more aerodynamic, and the centre of gravity is much lower on a recumbent, thus it’s much more stable. The stability increases even more with added weight. With roughly 30 kg of luggage, we were able to go downhill at speeds of 50 or 60 km/h and were able to take curves at 40 km/h without breaking. Doesn’t this sound like great fun? Well, it is. Going downhill is one of the greatest things of touring with a recumbent.

If you need to break hard, there’s no risk of flying head-first over the handlebar – the worst-case scenario is the rear wheel blocking and sliding, and the bike falling on its side (and you ending up sitting on your butt).

5. You have a better view

Because you’re in a relaxed and natural position, you don’t need to twist your neck to look up. Think pedalling through a canyon, or looking at the night sky, or bird-watching, or just enjoying the view around you.

Leave your classic cycling clothes at home. Especially those padded shorts that make you feel like you’re walking through the supermarket in diapers. Just an ordinary pair of shorts and any t-shirt will do the job – and you can use them off-bike, too.

One thing you do need though, is good raingear. You’ll need that on a normal bike, too, but on a recumbent you need to pay special attention to the front of your body. Zips need to be reliably waterproof, and the rain jacket needs to be comfortable to ride in a recumbent position. You also get a lot of rain on the front of your legs, so you need to take extra care to find a good pair of waterproof trousers.

Because of the reclining position, sunglasses and a sunhat (with a large visor) are especially important to protect against the glare of the sun.

7. Head winds are easier to tackle

You’re slightly more aeronynamic on a recumbent, but the main thing is that your feet go first, as opposed to a normal bike where you cycle head-first into the wind. This makes tackling headwinds on a recumbent a less frustrating experience, although it won’t prevent you from getting slowed down almost like any normal bike.

On a recumbent, you generally need to keep a higher spin rate to be comfortable (and to preserve your poor knees). Thus, you need to gear down – and do it before you stop. Starting to pedal on a recumbent in a high gear is notoriously difficult (and close to impossible on an uphill) and will make you loose balance quickly – not something you want to experience in a frequent stop-and-go scenario in a city centre. For this reason, we think that the Rohloff speed hub is particularly well suited for touring recumbents, because you can change gear in a fraction of a second even when stopped and with heavy luggage.

At least our models don’t. Most spare parts are standard: bracket, pedals, chain (you’ll just need several chains), brakes, etc. This means that many parts can be replaced on tour. The main special parts are the seat and the steering.

As your whole trunk has contact with the seat, it’ll feel every bump on the road. There are recumbents out there sold without any suspension – be kind to yourself and get a fully suspended recumbent, especially when carrying heavy luggage.

You’re potentially less visible to cars because of the lower position. You can increase visibility by using flags and reflective material. But the weirdness of the bike (see below) makes you all the more visible – in our experience, drivers give us much more space when we’re on recumbents than normal bikes.

A rearview mirror also becomes very important, so that you can see what’s approaching from behind. Turning your head around is possible on a recumbent with a bit of practise, but a mirror gives you way more safety.

By the way, any touring bike (even an upright one) should have a rearview mirror. You need to see those trucks coming from behind, whether you’re on a recumbent or a normal bike!

12. A recumbent is less flexible in city traffic

Many recumbents have a larger turning radius, so you can’t take very tight turns. You can’t pull up the front wheel to quickly jump on a sidewalk. It’s more difficult to slalom between cars (well, you shouldn’t do that anyway, right?). For us, this is the main reason why we don’t use our recumbents to get around the city.

True, because they’re not mass-produced. But many top-level normal touring bicycles are just as expensive, given comparable equipment (which is usually of very good quality on recumbents).

True, touring recumbents tend to be heavy. Ours weigh about 20 kg. Again, this is relative, because it depends what you’re comparing them with.

There are so many brands and models around, with so many different geometries, different seat heights and bracket heights, different seat forms. Any given model will allow for numerous adjustments – length, seat inclination, steering position, etc. Don’t just try one brand – if you don’t like it, try something else, and get advice from a specialized dealer who knows how to adjust a recumbent to your body. And don’t forget that it can take weeks or even months to be completely comfortable riding a recumbent.

17. You get bugs up your shorts

Recumbent riders will know what we’re talking about.

You’ll be talking to a lot of people during your travels. You’ll have to explain many, many times what this strange thing is. You’ll have your picture taken a thousand times. You’ll get people wanting to sit on your bike. They’ll want to know how much it cost. You’ll get many, many honks and waves on the road. People overpassing you closely so they can film you with their smartphone. You’ll get stared at, smiled at.

Do you have anything to add to this list? We would love to hear from you in the comments section below! 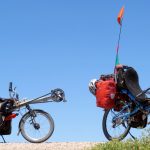 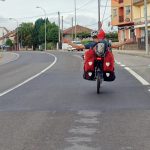 Can you ride a recumbent hands-free? 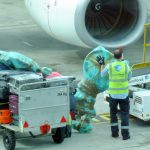 16 thoughts on “Touring on a recumbent bicycle: Everything you need to know” 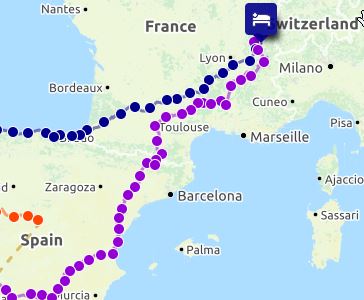